by Cliff Williams, on May 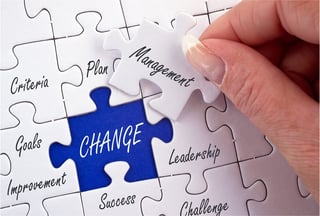 In the first blog entitled ‘I Just Can’t Get Buy In’ we concluded that when we find ourselves in a situation where Change hasn’t gone the way we wanted, we have no option but to trace the steps back and find out where the initiative went off track. In the example, we used which involved moving from one on one shift communications to computer recorded, it was that some employees had English as a second language. Quite often it is not something as drastic as that but no matter what the reason for the sidetrack it is only recognized after a failure. This approach is very much like employing Reactive Maintenance as your maintenance strategy – we wait until something fails and do whatever we need to fix it.

Change, just like maintenance, is much more effective when carried out in a proactive fashion. The similarity continues in the fact that even after the many years that these topics have been talked about, written about, and formed the bulk of presentations at conferences – very few organizations actually do what’s necessary to be successful in these fields. On the People and Processes website there are numerous blogs and hints which, along with the many courses People and Processes deliver, will help with your maintenance journey. This series of blogs will help you focus on Change Management from a proactive perspective.

Once again, I think we need to understand that Change in itself is not that difficult – you stop doing one thing and start doing another (this works best when you remove the option of being able to do the ‘old thing’). What determines if the Change is considered a successful endeavor, is the transition of behaviors from the ‘old thing’ to the ‘new thing’. There may be times where the way that everyone behaves is exactly what you want from the interest, involvement, initiative point of view - it is what they are doing that needs to be changed. An example of this is in the previous blog where the shift hand over which was excellent but done in a personal one to one basis was to be changed to being documented on computer basis. Providing computers enabled the change but the language issues prevented the transition of those interested, involved, initiative behaviors and resulted in the Change effort being deemed a failure.

Without realizing it when you are leading change initiatives what you’re really doing is leading culture change in your part of the organization and it’s this culture change that is key to your success. How does everyone go about the new actions – are they enthusiastic, are they eager are they looking to improve or are they simply putting in time?

So how can we set up to succeed with the transition and so the Change?

The one thing we can be certain about is that there will be reactions to any change initiatives – these will usually fall into 3 or maybe 4 groups. The first group is the early adopters – they see value in the change they want to participate and they will certainly help you succeed – the challenge is that this group rarely represents more than 20% of the population.

Jumping to the other extreme there are the resisters – these are the doom and gloom merchants who predict the failure of the initiative – if any of you have seen or read Winnie the Pooh stories these are the ‘Eeyore’ type of people with a cloud above their head all the time. Now there are usually many reasons that these resisters exist – maybe the organization has a reputation for ‘flavor of the month’ maybe they have participated in a change initiative that failed and they got burned – you need to understand these but they are not the priority as this group rarely represents more than 20% of the population as well. The largest part of the population sits in the middle group – the fence sitters. This group is taking a wait and see approach – is the company serious about this change – will they support the effort or leave the group to dangle, they wonder how exactly the change will transpire. Now the reason I said three or four groups is because this group can sometimes be split in two – the first group just want to see a demonstration of commitment and they are on board and the other group are just ambivalent about the whole thing and won’t get enthusiastic about it until the whole process is completed and there is no turning back. Obviously, you want the fence sitters to climb down on the side of the new beginning if you are to succeed.

There will also be concerns! How realistic is the plan, is this just a flavor of the month – Who is leading the change –  how much confidence in that person how much credibility do they have – is there belief that there is alignment in the organization so that there will be support–  sometimes these concerns manifest themselves in the well-worn - I don’t have time for this. What doesn’t usually get talked about openly are the real reasons for the concerns – for some they may doubt whether they will have the skills that they need to live in the new world – they are comfortable that they are able to do what’s required of them now – but the future? Some will worry about whether they are being given all of the information required to change – will they continue to be given it in the future and who do they ask or where do they go if they need more information. Some may be heroes under the current state – they may have been recognized over the years as having status – will all of this be different when the change is completed – will they just become one of the crowd and even worse for these people will others start to be recognized as the heroes. Then there are those who will not want to be part of a failure or don’t believe that the results that are supposed to be realized by the change will actually be realized and so they sometimes like to resist so that they can always say I told you so. I think that all of the concerns or challenges can be summed up by one phrase – ‘The Fear of the Unknown’ one of the most common traits of human beings – we know what live is like on this side of change but we don’t on the other side and we are wary if not afraid (this doesn’t apply to people who jump out of airplane for fun).

In the next Blog, we will expand on the 9 Steps of Change Management that will help you succeed in your challenges.